Holographic Optical Elements (HOEs) allow scientists to do amazing things with light that would otherwise be impractical with conventional optics. HOEs can redirect images from a light source that is hidden from view. HOEs can also create fully see-through virtual image displays. While the possibilities are practically endless, some of the most exciting display applications of HOE technology are being developed by Luminit scientists for Head-decoupled Displays, Head-up Displays (HUDs), Head- and Helmet-mounted Displays (HMDs), and high-precision gun sights.

What Is A Holographic Optical Element?

HOEs are holographic optical elements with interference patterns embedded onto a thin, clear photopolymer or other photosensitive film. The film can be applied to a surface and when a light source is projected on the film, the recorded interference patterns behave like a lens with optical power or a mirror that can capture and redirect the image. There are different ways to accomplish such optical magic, but areas being perfected by Luminit scientists include Substrate Guided Wave-based Holograms (SGWHs) and front-, back- and edge-lit HOEs.

Substrate Guided Wave-based Holograms use a substrate that acts as a wave guide to project a light beam to a specific area. It does this with one or two separate holograms placed on the same or opposite surfaces: an input hologram and an output hologram. In the case of HMD or other types of near-to-eye displays, the input hologram takes the diverging beam from a display and couples it inside the substrate. So instead of passing through the substrate, the light guides inside of it and bounces, a phenomenon referred to as Total Internal Reflection (TIR). That light beam then passes to the output hologram which sends the image outside of the substrate and to the viewer’s eyes. 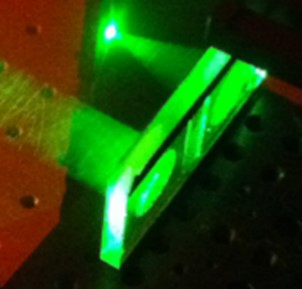 In HMD, the first Substrate Guided Wave-based Hologram captures a diverging light beam and sends it into the waveguide. The second hologram then captures that light and sends it straight to the viewer’s eye.

Instead of passing through the glass, the input light bounces on the borders of the substrate where a second output hologram captures the image and projects it outward.

With SGWH, the LED light source or microdisplay can be positioned away from the viewer’s eyes, which offers a distinct advantage for near-to-eye displays where space is often at a premium. The film is virtually weightless and is fully see through, meaning it can be applied to the visor of a helmet used in military aviation and display altitude, air speed, fuel levels and other critical flight data without the pilot having to look down at the control panel.

Example of how Luminit HOE-based technology can be used on a Helmet Mounted Display.

Because the HOEs are fully transparent, they can create perfect amended reality effects. For military applications, soldiers and pilots could receive high quality field training with the use of avatars which not only reduces costs but doesn’t endanger personnel. HOE film embedded on a gun sight could display wind direction, range, temperature, etc., through the scope’s lens. The beauty of Luminit SGWH is that the virtual image can be placed very close to the viewer’s eye or at the eye’s most relaxed state, which is viewing light from a source that is at infinity (like star light).

Example of a SGWH where critical data can be projected on a gun site. The image on the left is a HOE resolution test image to distinguish how clear the image will be.

Wave-guided designs with HOEs are also an ideal, flexible technology for smart glasses, as well as for spectrometers and narrowband filters. Luminit scientists are also developing edge-lit HOEs with only one hologram required which increases the total efficiency and brightness.

Luminit’s edge-lit HOE in the OFF (on the left) and ON (on the right) state. Note the transparency in the OFF state.

We’ll cover back-lit and edge-lit HOEs and how the technology can be applied to smart glasses, spectrometers and narrow band filters in future blogs so stay tuned!