Vehicle manufacturers are constantly seeking ways to reduce costs and the environmental impact of their cars, trucks, and SUVs from early stages of product development through manufacturing, and considerable attention is given to parts and components that contribute to a greener, cleaner vehicle. While most consumers recognize eco-friendly vehicles as those that use alternative fuels, hybrids, and electric cars,  there are lesser-known steps manufacturers take to reduce a vehicle’s carbon footprint, one of which is the use of surface relief diffusers on taillights and day-time running lights.

The introduction of LEDs into taillights resulted in eco-friendly benefits for automobile manufacturers as LED lights require less energy than incandescent bulbs. Initial LED taillight designs were pixilated with visible LED hotspots, so designers turned to diffuser films to homogenize the light and create the smooth and more visually pleasing taillights we see more of on the road today. Many tier 1 taillight engineers incorporate volumetric or bulk diffusers to homogenize light with the main attraction being cost. However, more designers are recognizing the value of surface relief diffusers such as Luminit Light Shaping Diffusers films which offer benefits that go beyond homogenization.

To understand the benefits, one must understand the differences between volumetric diffusion verses surface relief. While both manipulate light with the goal of spreading the beam angle of highly directional LED light sources, they do this in very different ways. Volumetric diffusers use a method known as bulk or volume scatter where microscopic resin balls or “beads” are embedded inside the substrate, and those tiny beads diffuse and spread the light by scattering it internally. The more rows of resin balls, the better the beam spread. While volumetric diffusers are easy to mass produce, there’s a tradeoff because adding more rows of beads reduces the transmission rate or the amount of light that passes through the diffuser. Average transmission rates for volumetric diffusers range between 60% - 65%.

Surface relief diffusers, on the other hand, work on the principle of surface scatter where holographic microstructures are embedded on top of clear substrate. These pseudo-random, non-periodic structures manipulate light by changing the direction of its energy. The low back-scatter of these structures are anti-reflective in nature and utilize light that would otherwise be wasted due to Fresnel loss. There’s less light absorption from the particles because there’s less light bouncing and bending inside the substrate. In addition, surface relief diffusers offer more flexibility when designing circular and elliptical angles than bulk diffusers. This precise angular control is an important feature for keeping light from spreading to areas where it’s not needed. Transmission efficiency of surface relief diffusers average 90% (depending on the angle).

A Little Goes A Long Way 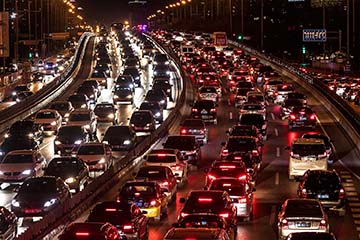 So how does this help auto manufacturers save energy and reduce carbon footprints? If the average taillight needs 100 lumens of brightness, a taillight diffuser with a 90% transmission rate would require 110 lumens since 10% of the light is lost. Compare this to a taillight with a 60% transmission rate. Since 40% of the light is lost, that same taillight would require 140 lumens to obtain the same photometric profile. More lumens mean more LEDs must be incorporated into the design. While a few less LEDs per taillight may seem insignificant, think of the big picture. Over 74 million vehicles were sold in the United States in 2019 alone. Roughly 40% or 6.8 million of those vehicles had LED taillights. If the average taillight has 40 LEDs (conservatively), the rear lighting of each vehicle would use 80 LEDs. Subtract the number by three or four LEDs per taillight and the number of fewer LEDs is in the tens of millions. Apply this to the 80 million vehicles sold worldwide in 2017, and the number is staggering. Fewer LEDs not only equates to less power consumption but less potentially dangerous substances such as lead, arsenic and other materials that can end up in ground water and landfills.

Another aspect to consider is the ever-shrinking power budget, especially with the increasing number of electric cars.  Today’s vehicle electrical systems need to support a variety of power-hungry devices, including driver assistance systems, back-up cameras and sensors, and semi-autonomous driving technology so automakers look for any opportunity to reduce draw on the battery. The higher transmission rates of surface relief diffusers result in a brighter taillight but there are other energy-saving advantages as well. Surface relief diffusers can control light more efficiently with both circular or elliptical angles that are more directional than bulk diffusers and place light only where it’s needed. Since no light is wasted above or below the taillight, power is used more efficiently.

In addition to the higher transmission efficiency of surface relief diffusers, these films offer an aesthetic advantage to today’s taillights which are transforming from boxy fixtures to dazzling works of art. The precise beam angle control of surface relief diffusers greatly improves uniformity and eliminates striations and LED hotspots, which helps designers and engineers create their own unique look without significantly impacting the brightness. With LED taillights trickling into even modestly-priced vehicles, more automakers are turning to Luminit Light Shaping Diffusers and discovering a technology that truly works for everyone.

Not to mention, with the recent global events, establishing reliable supply chains for some materials has been increasingly difficult. Not only can diffusers make it possible to achieve the same effects with fewer LED bulbs, choosing Luminit, an American company, reduces international shipping delays that pose a threat to lead times as well as the carbon emissions as a result of shipping.