The average end-user rarely thinks about the complex stack of components and optical films engineered into displays. Critical to the stack are diffuser films that act as light management components and distribute light uniformly. Luminit Light Shaping Diffusers are often integrated into fixed, mobile and avionics displays to improve uniformity and brightness, enhance viewing angles, and to overcome optical challenges inherent to many displays.

Our newest film is a double-sided solution that not only increases brightness and uniformity but solves a problem inherent to LCD/LED screens--Newton Rings. Named after Sir Isaac Newton, a Newton Ring is an interference pattern caused by the reflection of light beams between two surfaces. A common phenomenon in LCD screens, Newton Rings are the splashy-looking rainbow-like rings that appear on the screen when it’s pressed firmly or can also be visible when the screen is viewed at a tilted angle. The root cause is a micron-sized gap between two glossy surfaces (plastic film and the glass). A slight variation in the thickness of the gap (caused by oil or air bubbles) will cause the backward reflected light to interfere with the forward directed light, thus producing the rainbow-like rings. 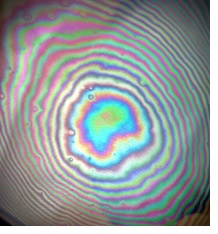 The iridescent effect of Newton Rings on an LCD display.

To avoid the Newton Ring phenomenon, display manufacturers often add micro-beaded film so that the two surfaces don’t touch each other. Luminit takes this a step further with a double-sided hybrid film. One side of the film includes a very low angle diffuser (1 degree or less) that is matte and prevents air bubbles from forming between the glass and itself. The extremely low angle diffuser has a high transmission rate and has an additional function of an anti-glare coating in high brightness environments. The other side of the film includes a high angle diffuser (60 degrees or higher) that performs the intended function (i.e., improve uniformity, etc.).  Since some type of diffuser film is already incorporated into the stack, Luminit’s hybrid solution gives manufacturers a two-in-one alternative that eliminates Newton Rings and diffuses the light.

Luminit also manufacturers micro-prismatic films that brighten a display or redirect images off-axis. Luminit Round-Tip Display (RTD) Film increases the brightness of displays by making use of refracted and reflected light to recycle otherwise wasted light and direct more light toward the viewer. The round-tip pattern is embossed on a 10 mil polycarbonate substrate  and can provide a brightness gain of 30% to 40% in a display. RTD is also available as a hybrid film with an integrated diffuser on the back, thus reducing the number of films in the display stack.

Our Directional Turning Film (DTF) redirects an image at a controlled 20° up, down, left or right to gain optimal viewing angles in tight spaces such as avionics displays. DTF can be incorporated in double-sided hybrid film with the DTF on one side and a Luminit Light Shaping Diffuser on the other side.

Behind every LCD TV or mobile device are optical films and polarizers designed to produce the best image possible. Luminit advanced hybrid films provide solutions to designers and can reduce the number of films needed in the stack, which is welcomed news to engineers tasked with designing displays within increasingly smaller and thinner packages.