Advances in LED technology continue to bring new opportunities for commercial and residential lighting, as well as innovations in digital displays. Existing optical technologies are also benefiting from the LED boom, specifically Holographic Optical Elements or HOEs.  Holographic Optical Elements are holographic images embedded onto a thin, clear photopolymer film that can be applied to glass or acrylic surfaces. When a light source, such as LED, is projected onto the surface, the invisible recorded holographic images come to life. Although the technology has existed for decades, Luminit scientists and engineers are turning once futuristic concepts into tangible opportunities for manufacturers and government agencies.

Because holographic images are captured on thin flexible film, engineers can create unique displays that would otherwise be impractical with conventional optics. For example, HOEs can redirect images from a light source that is hidden from view. HOEs can also create a transparent image on a surface such as glass or acrylic.  While the possibilities are practically endless, the most practical applications of HOE technology are being developed on head up displays (HUDs) on helmets and smart glasses, as well as holographic light projection on car windshields and interior and exterior lighting. 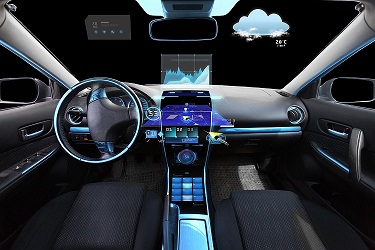 working on HOE technology for almost a decade and have refined the holographic capabilities for brightness, transparency, and responsiveness to color selectivity (i.e., red, green or blue).  For example, HOE film combined with an LED light source would allow a floating, transparent image to appear on the windshield without any obstruction of view. Because color selectivity is now possible, RGB LEDs can be divided by color and placed on the same thin, clear HOE film.  Red could display distance to the vehicle ahead, green an approaching car, and blue the current vehicle speed.  The driver does not need to focus on the image to view it or ever take his or her eyes off the road.

Other uses for HOE in automobiles include hiding a light source, such as interior dome lights, or center high mount stop light (CHMSL) on the rear windshield of modern cars.  Based on Luminit’s Substrate-Guided Wave based Holographic technology (SGWH), the film combines a holographic image area, an acrylic guide and an LED light source to transfer the projected light. An example of how this could applied to a car’s interior is the dome light. Dome lights typically protrude out of the vehicle ceiling. HOE film can be embedded in the liner and the light source can be concealed from view. Transparent in the off state, light from the dome would appear to come the liner. HOE can also be a key factor in branding.  Floor lights or mud lights, for example, on high end cars can project light as well as the auto manufacturer’s logo.

HOE for Heads up Displays and Wearables 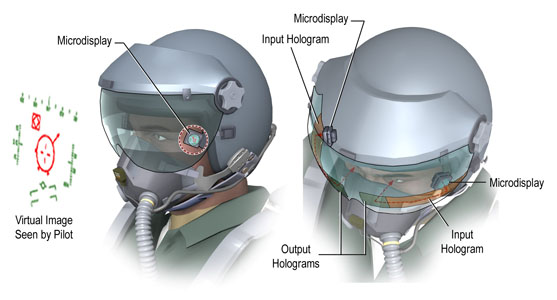 ll as wearable technology such as smart glasses.  For helmets, HOE possibilities include head-mounted displays for off-axis image projection of a high-resolution microdisplay through a thin plastic visor. For smart glasses, HOE eliminates prism-based optics currently used on Google glass with fully see-through technology that allows the images to be viewed at a virtual distance without added weight to the user. Luminit is also developing a high-resolution compact dynamic gun site that can display wind direction, temperature, etc., through the scope without the user ever having to take their eye off the target.