Even before Luminit started to work with tail light manufacturers, I found myself admiring and studying tail light designs during my long drives to and from work in Los Angeles.  Tail lights have come a long way since the incandescent bulb. Back then, designers incorporated secondary collection optics like metalized parabolic reflectors to collect and reflect the light back out of the tail light at the required beam angles and lumens to meet minimum levels set by the Department of Transportation (DOT).  Some the reflectors incorporated pillow type optics to create multiple images of the single incandescent light source.

The introduction of LEDs presented tail light designers with new challenges as well as design freedoms to create many of the unique tail lights seen on the road today.  LEDs are a directional light source, emitting light only in the forward direction. This eliminated the need for reflectors and much thinner tail lights could be achieved.  The initial and less creative tail light designs faced the LEDs directly at the vehicles behind it, creating a very pixelated and bright look that many drivers found irritating, although many others were willing to pay for this expensive option.

The LED Light Source: The directional nature of LEDs eliminated the need for reflectors and thinner tail lights were possible.  Initial designs were pixelated and bright, a feature many motorists found irritating.

German car companies were the first to incorporate LEDs in their designs and were also the first to improve the uniformity of their tail lights.  Manufacturers incorporated uniform “night time design elements” that were accomplished by edge lit designs incorporating LEDs at the input end of a light pipe as shown in the picture below. 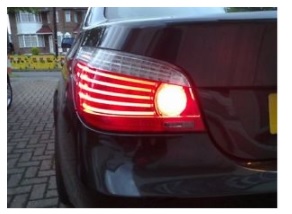 The light guided through the light pipe on the principles of total internal reflection (similar to how fiber optics work) until they encountered a “rib” or other micro-structure which allowed the light to escape, creating a uniform and distinct glowing design element that set brands apart from each other.

American car companies chose a less expensive route that delivered a brighter design element than a light pipe design could deliver. They kept the direct view orientation of the LED and incorporated a tertiary optic (i.e., diffuser) to create the uniform look, as shown here. 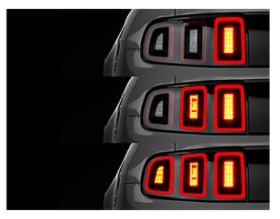 German car manufacturers continue to push the boundaries of tail light designs. The latest development is the use of white diffuse reflector materials in indirect lighting configurations (i.e., LEDs pointed away from the exit aperture of the tail light).  This configuration suits the purpose of increasing the path length of the light so a more uniform and thinner tail light can be achieved. 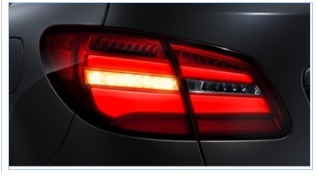 Up until just recently, the uniform design aesthetic was only being applied to night time design elements.  We can now find vehicles that have excellent uniformity in the brake light portion of the tail light, as seen below. 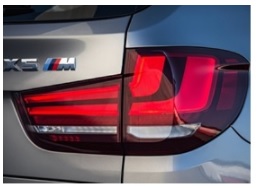 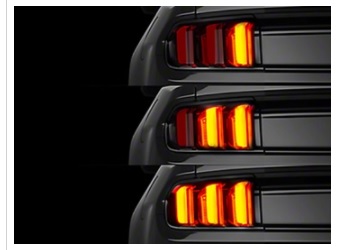 As the title of my post indicates, this is an incomplete history of the optics of tail lights.  I would love to hear from you on any optics trends that were missed or any future trends in the changing field of automotive tail lights. Send me an email at  sturgut@luminitco.com