While Computer Generated Holography is not a new field, advances in computing technology are bringing new applications for CGHs. If your first thought when you see the words computer generated holography is “Help Me, Obi-Wan Kenobi,” think again. Such futuristic holography is exactly that—futuristic. However, progress is being made in 3D and multi-planar holography, and Luminit’s expertise in this field is helping to re-shape what is possible.

What Is Computer Generated Holography?

Computer Generated Holograms are holographic interference patterns that can be embedded into various materials. When these patterns are exposed to a light source, such as an LED or laser, the image recorded in the hologram becomes visible to the human eye. Like traditional holograms, CGH allows viewers to see realistic holographic images without the need of glasses or other special eyewear. The difference between the traditional hologram and CGH is how the original images are created.  The former uses real objects to reconstruct the image. In CGH, a predetermined computer simulation creates the holographic image, and when that hologram is exposed to a light source, the image will appear on an actual surface such as a wall or other screen. Because computer simulated holograms can be affordably mass produced, the technology has a lot of potential for use in a variety of industries.

CGH from Novel to Futuristic

Computer Generated Holograms can be both virtual and real. Virtual holographic images are not displayed on a surface but rather are projected onto the viewer’s retina—think Google Glass. Real holographic images are displayed on a surface where anyone close to the surface can view them. Virtual three-dimensional holography is a technology that is under development now and real two-dimensional holography has existed in the commercial marketplace for years. However, 3D holography where real images are produced is a huge technological step forward that companies like Luminit are exploring. Holograms that produce virtual and real images may have similar applications but the technologies are completely different.  Creating a real 3D image that anyone can see is far more difficult because, unlike virtual images, the image must exist in a three-dimensional environment, such as smoke, water droplets, dust particles or other volumetric surfaces. Luminit is exploring the use of CGH to create virtual, 3D holographicimages without the need of eyewear. Luminit scientists are also developing computer-generated two-dimensional holograms, and eventually 3D CGH for display applications.  A computer generated hologram that could display a company logo in the lobby instead of a one-dimensional sign is one example. 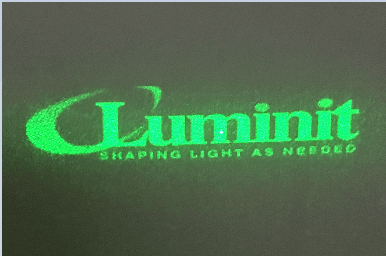 Taking this concept another step forward, Luminit is developing 4D (multi-planar) holography where different images could appear based on the position of the viewer’s eye.  Uses for Luminit 4D CGHs being explored now include the automotive industry where multi-planar holography could enhance situational awareness. For example, with virtual 4D CGH, three different image planes could appear on a car windshield (i.e., GPS map, speedometer, and weather conditions), and the driver/viewer could choose which image to concentrate on at a particular time. With Luminit 4D multi-planar CGH, it is also possible to display real holographic images that appear to everyone nearby, such as on a wall. Different images could appear on the wall and change depending on the distance from the hologram.

Such uses are still in development stages and it may be some time before 4D makes it to the public eye.  However, Luminit is on the forefront of research and development in this field and progress is being made every day to turn such futurist concepts into a reality.