Glare is a phenomenon most of us experience often on a daily basis. Whether it’s the sun reflecting on a car windshield or artificial light reflecting on a marble floor, this unwanted artifact can range from being mildly distracting to sometimes dangerous or blinding. With LEDs the primary light source in accent, ambient, and task lighting, designing glare free lighting is critical as these fixtures can be notoriously bright.

While secondary optics such as lenses and reflectors play a critical role in collimating LED light, these components are expensive when the LED count is high and when the fixture is large (e.g., troffers and linear hanging pendants). This is where tertiary optics such as Luminit prismatic films and Glare Control Film come into the picture.

What Causes Glare in LED Lights?

Glare is caused from the high angle of a Lambertian light source of an LED.  Most LEDs have a large 120deg Field of View (FOV), and this large angle will have stray light that affects users outside the intended illuminated area. A glare control film will cut off this high angle light output and keep the intended light in its appropriate distribution.

Lighting specifiers need to account for LED light glare in fixtures before they are installed at a site. The industry standard for glare metrics in interior lighting is the Unified Glare Rating (UGR) published by CIE in 1995. The UGR of a fixture can range from 10-30; higher UGR values indicate that a luminaire will cause more intense visual discomfort.

The Illuminating Engineering Society (IES) documents UGR in several recommended practices, and below is a list of recommended values: 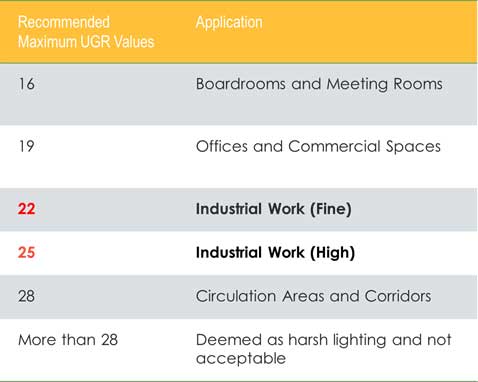 Luminit’s linear prismatic films have been addressing glare from LED lights for years at OEM and lighting designer levels. These specialized non-glare films have micro prismatic structures that manipulate the light and suppress high angle rays. Our Lenticular Batwing Diffuser (LBD), for example, is often designed into linear fixtures commonly found in retail stores where the fixture is located in the center of the aisle. The LBD will split the project beam of light and focus it into two narrow lobes. This allows more light to illuminate the shelving and reduces glare from light projecting downward onto a highly reflective store floor.

Luminit recently introduced an additional prismatic film with conical structures that reduce glare in both axes of the fixture.
Glare Control Film was designed to maintain low glare in a fixture even when used in conjunction with a diffuser which typically can increase the glare; therefore, Unified Glare Ratings of <19 are achievable even when using a diffuser. This new anti-glare film suppresses high angle rays to significantly reduce glare from LED light fixtures in locations where people are particularly sensitive to it.

The end goal of our prismatic films is to create a well-balanced, aesthetically lit space that is human centric or considers the emotional and physiological needs of humans. These films are ideal for fixtures incorporated in hospitals, lobbies, offices, sports arenas, and other spaces where controlling glare from LED lights is needed. Reach out to sales@luminitco.com for more information on our glare-controlling prismatic films.